Black Market Wine Co. It all started by “smuggling” wine over the border. Meet the “Wine Black Marketeers”

This winery has as rich and colourful a history as any in the Okanagan. In the early 1900s, brothers Sam and George Hawthorne carved a homestead and a ranch on this slope above Okanagan Falls, giving their name to the mountain here. In 1919 the ranch was purchased by Major Hugh Fraser, a former Montréal accountant. While serving in France during World War I, he was captured and spent two years as a war prisoner prior to the armistice. Shortly after the war, he came to the Okanagan to visit a playwright friend and liked the wide-open spaces so much that he stayed. Here, near the town of Okanagan Falls, he planted vines and seeded a legend. The ranch was his home for more than 45 years. The Major oversaw the planting of the first vines in 1961. The varieties were primarily Maréchal Foch, Chelois, Buffalo and Bath, the hybrid and labrusca varieties in general use in Canadian vineyards at the time. The grapes were sold to Andres Wines Ltd. by the Major. When he retired to Penticton in 1966, dying four years later, Bill Worth took over for several years before selling to a foreign buyer. Albert LeComte, a Saskatchewan-born sign company owner from Vancouver, bought the ranch in 1983. He converted the old dairy barn on the property for wine production and opened LeComte Estate Winery in 1986. One of his initial labels was a red blend called Count Bergerac. It was common then for Canadian wineries to devise labels that gave a French patina to a Canadian wine. LeComte’s most successful wines were made from newly planted Gewürztraminer. These caught the attention of Sumac Ridge founder Harry McWatters who needed more Gewürztraminer to supply one of his top brands. He recognized that the ranch was one of the Okanagan’s best sites for the variety. In 1995, he bought the winery and renamed it Hawthorne Mountain Vineyards. Both this winery and Sumac Ridge were acquired in 2000 by Vincor. In 2003, Hawthorne Mountain created the See Ya Later label for its reserve wines. The wines were so well received that Major Fraser’s favourite phrase became the winery’s third and current name. 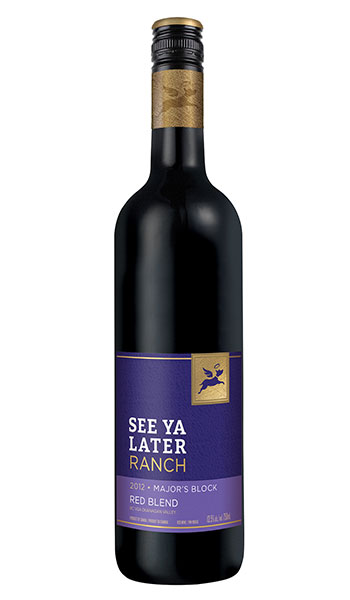