Our Wineries are Open!

This year, wine tasting in the Heart of Wine Country™ will look different than in the past. Please click here to see how each winery is ensuring the safety of guests and staff. Please be patient, be kind, and drink wine!

All the roads (should) lead to Blasted Church!
Make your pilgrimage to the Okanagan’s most creatively unique, and fascinating winery. Angelic wines. Paradisiacal views. Heavenly memories.
Come to Church!

The vines at Blasted Church grow on sloping plateau above the eastern shore of Skaha Lake. From the windswept hilltop where the wineshop is situated, there are picture postcard views across the lake to the village of Kaleden on the western shore. The vines grow on sandy loam; the good mix of sand and clay give the soils good water-holding capacity. The winery makes its own compost, adding it to give the vineyard more organic matter.

Vines were first planted here in the 1970s by Croatian-born Dragan (Dan) Prpich who came to the Okanagan in 1973 after working as a millwright in a Hamilton steel mill. Having grown up in a winemaking culture, Prpich decided in 1995 to add a winery to the vineyard. He opened the winery in 2000 but, as a consequence of family tragedies, sold it in 2002.

Evelyn Campbell, the new and current owner, was a certified general accountant who had an independent practice in Vancouver. Wanting to run a business of her own, Evelyn investigated seven wineries during two and a half years before buying Prpich Vineyards. Putting her own stamp on the winery, the name was ultimately changed in consultation with Brandever Strategy Inc., a Vancouver company specializing in branding wineries. The name, Blasted Church, was inspired by a colourful chapter in the history of Okanagan Falls.

In 1929 an Okanagan Falls congregation sent a crew under foreman Harley Hatfield to dismantle and move a Presbyterian church from Fairview, the mining ghost town near modern-day Oliver. Hatfield used a small dynamite charge inside the building to loosen the nails. The steeple fell down but the rest of the church was dismantled successfully and rebuilt in Okanagan Falls. It came to be referred to as “the blasted church,” and served Presbyterian, Anglican and United congregations well into the current century. The stained glass windows in the church were a gift of Major Hugh Fraser, who owned the property that became See Ya Later Ranch Vineyards.

The story of the church, along with other vignettes of Okanagan Falls history, has been memorialized through the colourful caricature figures that populate the Blasted Church labels. Original art was commissioned for the initial family of labels and again in 2010 when the labels were refreshed. The labels have won numerous international design awards. More to the point, the labels powered a more than 10-fold growth in the sales of Blasted Church wines over the first decade after the Campbells acquired the winery.

In 2018, the winery introduced new labels where figures from classical paintings are plucked from their holy surroundings and placed into modern-day scenarios. Inspired by Renaissance era masterworks, these creative labels depict an artistic rebirth at a time of increased innovation in the Blasted Church wine program spearheaded by winemaker, Evan Saunders. In the last year Evan has expanded the wine offering with a new selection of revered wines called the Small Blessings series, named for their small lot production and made with minimal intervention in the cellar using techniques that are often labour intensive, but which allow the fruit to shine. The winery also introduced wines made in a clay amphora and a clay egg, and even bottled the 2016 Sacrosanct Cabernet Franc in handmade terracotta – all produced by the same craftsman using the same clay in the town of Impruneta, Italy. Blasted Church is the first winery in Canada and among the first in the world to source terracotta bottles.

Monday to Friday
10am to 5pm

Summer Hours
April to October
10am to 5pm Daily 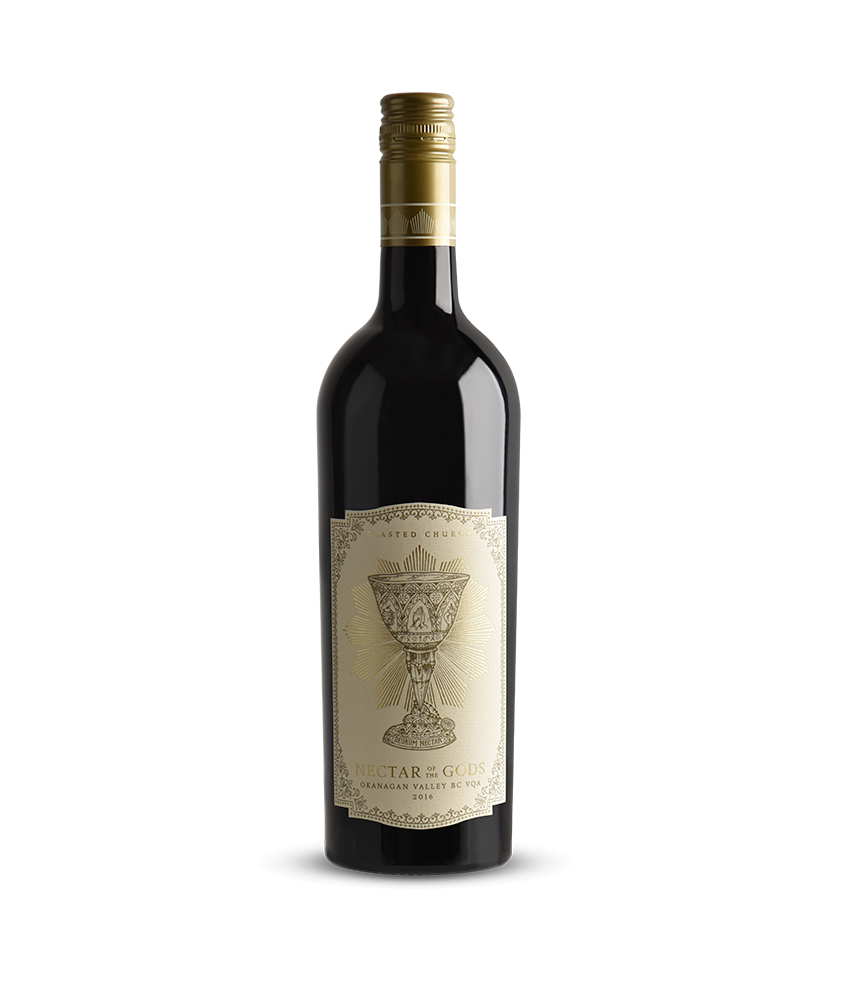